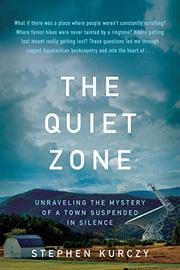 Unraveling the Mystery of a Town Suspended in Silence

An exploration of perhaps the last quiet town in America.

Journalist Kurczy, who hasn’t “owned a cellphone in nearly a decade,” takes us through the intriguing community and culture of Green Bank, West Virginia, dubbed “the quietest town in America.” Nestled “deep in the mountains of Appalachia,” the town is home to the Green Bank Observatory. Due to the demands of the facility’s astronomical research, devices emanating radio frequencies that might interfere with their telescopes are banned in what is called the “National Radio Quiet Zone.” After learning about this seemingly idyllic community, the author dug deeper, hoping to discover a better life. During numerous visits, Kurczy interviewed and heard stories from and about some of its residents who have sought refuge in the silence, including neo-hippies and those suffering from “a mysterious illness called ‘electromagnetic hypersensitivity.’ ” The author also discovered a darker side of this remote area: conspiracy theories, unsolved deaths, and ties to the racist National Alliance. Throughout his time in Green Bank, Kurczy ate with the locals, drank moonshine, shot guns, and participated in cave-dives and other adventures. In a community filled with contradictions, he also found that neighbors were always willing to help each other in times of need. Kurczy also examines educational and health concerns, the impact that the absence of technology has had on the citizens’ lives, other means of communications used within the community, and inaccurate portrayals of the region by the media. The epilogue offers an update based on the effects of the current pandemic. Although Kurczy recognizes that various viewpoints exist within the community and includes them in the text, the narrative also includes some physical and cultural clichés frequently found in works related to rural Americans. Nonetheless, the story remains captivating.

A multilayered illustration of a unique community where things aren’t always what they seem.