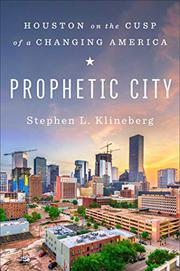 Houston on the Cusp of a Changing America

A veteran sociologist maps nearly four decades of changes in an urban “bellwether of change.”

“Houston is America on demographic fast-forward,” Klineberg argues in a trailblazing study that draws on 38 years of annual surveys of residents’ views by the Kinder Institute for Urban Research at Rice University, of which the author is the founding director. His strongest evidence includes the “entropy index,” or “how close a given population comes to having equal fourths of Asians, blacks, Hispanics, and Anglos.” As the author notes, “by that measure, the Houston region is virtually tied with the New York metro for the diversity crown.” Yet as the city has predicted and reflected the American shift toward a more multiethnic society, it embodies the nation’s paradoxes. An anti-government, pro-business city, Houston elected the first openly lesbian mayor of a major American city, Annise Parker, in 2009, but voted against guaranteeing equal rights for the LGBTQ community in 2015. The city remains “profoundly segregated,” marked by growing income and educational inequalities. Underlying such realities are region-specific variations on national concerns such as crime, pollution, immigration, traffic congestion, and climate and economic uncertainties. Built on a swampy, bayou-laced, Gulf Coast floodplain, the city is vulnerable to devastating storms like Hurricane Harvey in 2017, and it has an industrial base in petrochemicals, raising “the question of how much longer oil and gas can sustain the Houston economy” as people turn to alternate energy sources. Although perhaps too optimistic in his conclusion that Houstonians can help to build “a truly successful universal city and nation, the first of its kind in human history,” Klineberg supports his case with a wealth of survey research, interviews with experts, and user-friendly graphs, all of which make this book invaluable for anyone seeking a deep understanding of an underappreciated city.

A unique blend of analysis and research that is likely to become a classic work of scholarship on Houston.