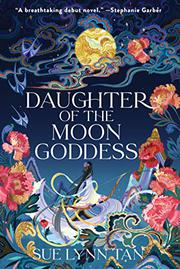 DAUGHTER OF THE MOON GODDESS

Set against a background of Chinese mythology, a young woman resolves to save her mother from magical imprisonment.

Xingyin is the daughter of Chang’e, the Moon Goddess, imprisoned on the moon for offending the Celestial Emperor. Xingyin’s very existence is a secret—as part of her punishment, Chang’e is to have no unsanctioned visitors. When Celestial soldiers almost discover her, Xingyin runs away, promising not to reveal her parentage and determined to reverse her mother’s punishment. Alone in the Celestial Kingdom, Xingyin has the remarkable good fortune of becoming Prince Liwei’s companion, attending his lessons and learning not only herbology and magic, but also the fighting arts. Xingyin and Liwei grow close, but as Liwei is the son of those responsible for Chang’e’s imprisonment, Xingyin must continually hide a part of herself. As Xingyin pursues her goals, others plot against the Celestial Kingdom, and the emperor and empress are not without their own machinations. Packed with magic, dragons, and plenty of scheming, this novel features many expected tropes, freshened up by the well-developed setting and strong basis in Chinese mythology. Xingyin is sometimes frustratingly successful and spends much more time with her male love interests than her female friends, but the plot delivers what it promises in a quite satisfying, though predictable manner. The prose is lovely and fluid, lush descriptions of magic and immortal life buoying the narrative.

A standard court fantasy, unique in its expansion on the story of the Mid-Autumn Festival.