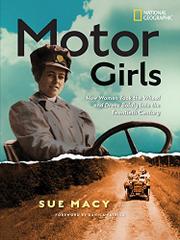 Well-documented proof that, when it came to early automobiles, it wasn’t just men who took the wheel.

Despite relentlessly flashy page design that is more distracting than otherwise and a faint typeface sure to induce eyestrain, this companion to Wheels of Change: How Women Rode the Bicycle to Freedom (2011) chronicles decided shifts in gender attitudes and expectations as it puts women (American women, mostly) behind the wheel in the first decades of the 20th century. Sidebar profiles and features, photos, advertisements, and clippings from contemporary magazines and newspapers festoon a revved-up narrative that is often set in angular blocks for added drama. Along with paying particular attention to women who went on the road to campaign for the vote and drove ambulances and other motor vehicles during World War I, Macy recounts notable speed and endurance races, and she introduces skilled drivers/mechanics such as Alice Ramsey and Joan Newton Cuneo. She also diversifies the predominantly white cast with nods to Madam C.J. Walker, her daughter, A’Lelia (both avid motorists), and the wartime Colored Women’s Motor Corps. An intro by Danica Patrick, checklists of “motoring milestones,” and an extended account of an 1895 race run and won by men do more for the page count than the overall story—but it’s nonetheless a story worth the telling.

Macy wheels out another significant and seldom explored chapter in women’s history.