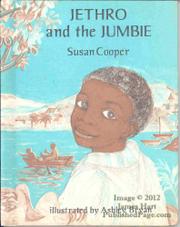 JETHRO AND THE JUMBIE

"Tom? It have my birthday next week," Caribbean islander Jethro reminds his older brother. But Thomas, who had promised to take Jethro fishing when the little boy turned eight, now says "You not big enough, man. How could tell that you wouldn't grow none? Got to be big to help haul them fishpots. Muscle." Well, this makes Jethro so mad that he marches right through the woods on the fearsome jumbie trail; and even when he sees a jumbie—a sort of ghost in the form of a fuzzy ball of light—he speaks right up and tells it, "You don't scare me none. You not real." In a central episode which suggests that Tinker Bell has come to the islands, the fading, sobbing jumble confesses to its dependence on being believed in, and Jethro relents. In return, the jumble gives Thomas a dream that changes his mind about taking Jethro fishing. "Sometimes things that ain't real can be a whole big help to people that are," says Jethro. On the jacket flap Cooper says that she wanted to remind children of the "music and vitality of regional language." The idiomatic speech and other regional touches give the well-made little story some color, though like the jumbie it lacks the fullness of life that would convince you it's real.