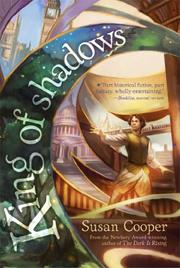 When Nat Field, an orphan living with his aunt, is chosen for an all-boy acting troupe traveling to London to perform Shakespeare in the reconstructed Globe Theatre, he hopes it will help him escape from his family’s tragedy. Instead he finds himself switched in time with another Nat Field, who carries the Plague. In the past he performs with the Bard himself, who becomes a surrogate father and helps him deal with his sorrow, while preparing to play Oberon to Nat’s Puck in a performance before the Queen. Cooper is in top form here; her confident prose, at once muscular and lyrical, vividly conveys the sights, sounds, and smells of Elizabethan London. Most powerful are her descriptions of the story and imaginative staging of A Midsummer Night’s Dream, which should have readers scurrying for the original. Her poignant characterization of Nat, whose grief is released by Shakespeare and healed by his words, captures perfectly an adolescent in thrall of the theater, in all its grittiness and grandeur. A dramatic and sensory feast. (Fiction. 10-14)