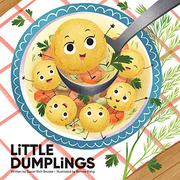 When Little Dumpling accidentally rolls away from her salty broth at a dumpling festival, she discovers that nearly every cuisine features some kind of dumpling.

Her adventures lead her to encounters with Ghanaian fufu—she samples the thick West African stew and finds it tasty—Chinese shumai, Italian ravioli, Japanese gyoza, and more, observing all the differences among them. “Patted, pinched, filled, folded, poached, pan-fried, steamed, sauced!” the narration exclaims. Little Dumpling realizes she “had no idea there were so many ways to be a dumpling!” When Little Dumpling is reunited with her sibling dumplings (who are revealed to be knaidels, from Central and Eastern Europe), she is happy to be home but also curious whether there are “even more new friends to meet.” On the book’s final spread, Little Dumpling is seen on the back of a fusion food truck, waving to her siblings. The book aims to be a diversity primer but leans on tired food metaphors to do so. Occasionally, Brooke also uses othering language, such as describing a Mexican chochoyote as a “creature.” Pang’s illustrations are whimsical and the highlight of this otherwise unremarkable book; her dumpling characters are expressive and distinctive, with attention to culinary details. The cheery endpapers provide a guide to the dumplings introduced, naming each of them and supplying their country of origin.

A superficial take on culture and diversity when the conversation has moved beyond such surface explorations.