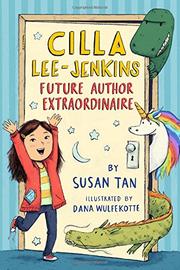 From the Cilla Lee-Jenkins series, volume 1

An aspiring author grapples with change in her family.

Cilla Lee-Jenkins, age 8 ½ and in second grade, has a set of white grandparents, the Jenkinses, whom she sees on Thursdays when her parents work late, and a set of Chinese-American grandparents, the Lees, whom she sees on Wednesdays when her parents go out to eat. Her mom's expecting a baby Cilla calls The Blob. Cilla plans to be an author, and this debut novel purports to be her journal, in which she describes not only what is happening to her now—dreading the new baby and unhappy that the two sets of grandparents don't get along—but tells several stories from her younger days in preschool and kindergarten. This creates a problem. While Cilla's voice is clever, her stories, attitude, and problems are all those of a far younger child than one who could write such a sophisticated account. The heart of the story—Cilla's disappointment that her sister's birth unites the family in ways hers did not—is glossed over, and while Cilla's unhappiness about the new baby feels unrealistically extreme, so too does the speed with which it disappears. Tan, who grew up in a mixed-race family, does a lovely job of showing how Cilla finds joy in both sides of her heritage. Wulfekotte’s soft, black-and-white illustrations appear every few pages.

In the end, this book is too difficult for most of the 7-year-old readers who would like Cilla and features too young a protagonist to interest 10-year-olds ready for books of this length. (Fiction. 7-10)