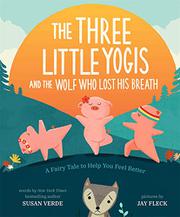 THE THREE LITTLE YOGIS AND THE WOLF WHO LOST HIS BREATH

A Fairy Tale To Help You Feel Better

This wolf huffs and puffs whenever he is angry, simply because he doesn’t know what else to do with his anger.

But now he has a problem: He has lost his huff and puff. One day when in a cranky mood he encounters a peaceful-looking pig practicing yoga. Much as he wants “to huff and puff and blow down” the pig’s straw house, he cannot. The pig yogi—a caricatured stereotype of all things yoga—oozes compassion for her natural competitor; suggests they “meditate on that” when he explains his dilemma (which is, of course, that he can’t blow down her house); and teaches him belly breathing. When this isn’t enough to fully squelch the wolf’s urge to huff and puff, they go off to another yoga-practicing pig’s home for more meditation and breathing until they finally wind up at a brick yoga studio. It’s surprising to see such a flawed treatment from the author of I Am Yoga and I Am Peace (2015 and 2017; both illustrated by Peter H. Reynolds). The tone is surprisingly elitist, suggesting that those who don’t know how to breathe away their anger just need to be enlightened by yoga. The illustrations further propagate this trope with their stark contrast between the villainous wolf and the serene pigs. The only bright spot is the inclusion of a nonbinary pig, who’s referenced using the singular “they.”

Even the most yoga-enthused readers may find this title pretentious and off-putting.