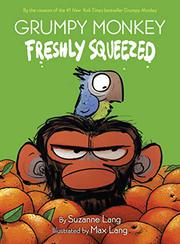 From the Grumpy Monkey series

Grumpy Monkey moves from picture books to a graphic-novel chapter book, in which he tolerates his friends’ goofy antics during a group journey to an orange grove.

Divided into three chapters of cartoon-style comics, with bonus interludes in between, the book features Jim Panzee, the protagonist of the Grumpy Monkey picture-book series. He is on his relaxing Wednesday Walk, stress orange in hand, but little is quiet about his journey once his jungle friends appear. After the accumulation of unwanted companions causes Jim to squeeze his stress orange so hard that he destroys it, the group seeks a replacement, stopping for a papaya fight, a splash party in the water, and some swinging from vines. They eventually escape angry parrots with the only orange the parrots didn’t devour. There’s a good dose of potty humor: Leslie the giraffe responds to Norman the gorilla’s invitation to come along with “you bet your butt I do,” and two spreads are devoted to poop humor (with Jim as the butt of the joke). There’s also wordplay (a chapter called “Orange Ya Glad We Made It?”; Jim’s repeated mantra, “Squeeze, squeeze, mind at ease”; and a guide to speaking Jim’s nonsense language, in which the syllable ob is inserted before vowels in every word). That the book pauses for a “Primate Primer” with talking simians will be like pouring lemon juice on a cut for those readers who see in anthropomorphized monkeys a perpetuation of pernicious anti-Black stereotypes.