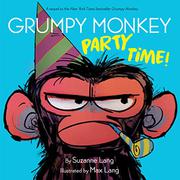 Jim Panzee—the primate protagonist of Grumpy Monkey (2019) fame—is having a fine day until he receives an invitation to a party; the comic anxiety commences.

The source of Jim’s nerves is the idea of dancing. Jim Panzee, as it turns out, doesn’t know how to dance. This information shocks his jungle friends, who each give him pointers on how to bust a move on the dance floor. Jim tries to go along with his friends but discovers he’s not having a good time, not because he can’t dance, but because he actually doesn’t like dancing. Speaking out about his preferences inspires other animals to voice that they aren’t fans of the pastime either. They discover there are many other fun things to do at a party, like enjoy refreshments and play games, and still have a great time. Like its precursor, this title emphasizes self-acceptance and authenticity. It effectively communicates through the fanciful illustrations the feelings of facing pressure to conform to others’ expectations and the relief of honesty. Whatever gains this title develops in terms of social-emotional learning concepts, however, are offset by the insensitive use of a monkey protagonist, particularly linked to the racialized skill of dancing. It’s a shame that a series so imbued with emotional intelligence does not demonstrate more awareness of historical use of simian imagery as a derogatory referent to black people.

Likely to find mass appeal but should be considered with scrutiny. (Picture book. 4-8)