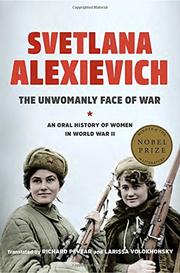 THE UNWOMANLY FACE OF WAR

An Oral History of Women in World War II

The Nobel laureate (2015) writes about “the wrong kind of war”: oral confessions from Russian women intimately involved with fighting for the motherland.

In her distinctive nonfiction style, a mix of her own reflections and transcribed, edited interviews with diverse Russians who have lived through decades of hardship, Alexievich (Secondhand Time: The Last of the Soviets, 2016, etc.) focuses on women who recounted to her amazing stories of their participation in World War II. Although first published in Russia in 1985, with an English-language version published in Moscow in 1988, this version features a sprightly new translation and a restoration—as the author notes in her introductory remarks—of material “the censors” threw out as being unheroic or unpatriotic. As Alexievich writes, war is traditionally known through male voices, yet Russian women, fired up by the urgency to push back the invading Germans, took up the military challenge and demonstrated enormous courage and ability. However, women were often silenced after the war, since assuming traditionally male military duties was seen as unwomanly—indeed, who would marry them? Alexievich writes movingly of how these extremely strong, now-elderly women had rarely been encouraged to tell their stories, but they eventually opened up under her gentle questioning and attention. Most often very young when recruited, the women reveal how they had to beg their male officers to allow them to get to the front line; once they mastered their tasks, the men were amazed at what they could do, and the Germans were horrified to learn that many of the snipers were women. Moreover, beyond their military prowess, of which they were very proud, the women offer touching, intimate details about their service—e.g., being assigned too-large boots and clothing, the shame of having to wear men’s underwear and managing their periods, finding love, and the ability to feel empathy for the starving German children after the war.