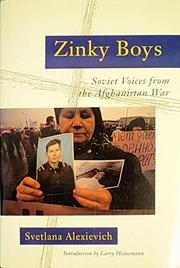 Soviet Voices from a Forgotten War

An affecting, often haunting, compilation of first-person testimony on the Soviet experience in Afghanistan. From 1979-89, Moscow tried, unavailingly, through force of arms to support a puppet regime in a hostile land. But as those who found themselves at the sharp end of the bayonet and lived to share their grim memories with Byelorussian journalist Alexievich make clear, the state conducted the savage conflict in virtual secrecy. The ill-trained, poorly equipped teenage conscripts who did most of the fighting were told only that they were doing their international duty by defending the nation's southern borders against bandits; the realities of mortal combat with mujahideen, of course, were something else again. On the home front, grieving women were obliged to bury dead sons or husbands (who had been shipped back to the USSR in zinc coffins: hence the title) under cover of darkness in graves whose headstones offered no clues as to their untimely ends. Alexievich has traced down a host of officers, enlisted men, doctors, nurses, and civilian workers who served in Afghanistan—as well as those who waited, frequently in vain, for their safe return. Her witnesses tell their stories in brutally honest fashion, recalling the horrors of doing battle with a guerrilla foe; the shame of inflicting casualties on a civilian populace that was integral to the indigenous resistance; behind- the-lines profiteering; widespread drug abuse; how veterans preyed upon new arrivals in country; the shock of being reviled or ignored in the Soviet Union; and the anguish of bereavement without the anodyne of honor. An oral history that has considerable relevance for a superpower whose veterans and citizens are still coming to terms with the involvement in Vietnam.