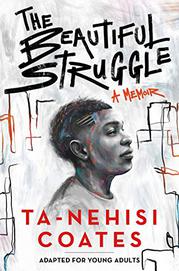 The acclaimed author of Between the World and Me (2015) reflects on the family and community that shaped him in this adaptation of his 2008 adult memoir of the same name.

Growing up in Baltimore in the ’80s, Coates was a dreamer, all “cupcakes and comic books at the core.” He was also heavily influenced by “the New York noise” of mid-to-late-1980s hip-hop. Not surprisingly then, his prose takes on an infectious hip-hop poetic–meets–medieval folklore aesthetic, as in this description of his neighborhood’s crew: “Walbrook Junction ran everything, until they met North and Pulaski, who, craven and honorless, would punk you right in front of your girl.” But it is Coates’ father—a former Black Panther and Afrocentric publisher—who looms largest in his journey to manhood. In a community where their peers were fatherless, Coates and his six siblings viewed their father as flawed but with the “aura of a prophet.” He understood how Black boys could get caught in the “crosshairs of the world” and was determined to save his. Coates revisits his relationships with his father, his swaggering older brother, and his peers. The result will draw in young adult readers while retaining all of the heart of the original.

A beautiful meditation on the tender, fraught interior lives of Black boys.