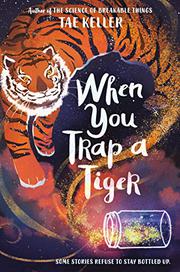 WHEN YOU TRAP A TIGER

A young girl bargaining for the health of her grandmother discovers both her family’s past and the strength of her own voice.

For many years, Lily’s Korean grandmother, Halmoni, has shared her Asian wisdom and healing powers with her predominantly White community. When Lily, her sister, Sam—both biracial, Korean and White—and their widowed mom move in with Halmoni to be close with her as she ages, Lily begins to see a magical tiger. What were previously bedtime stories become dangerously prophetic, as Lily begins to piece together fact from fiction. There is no need for prior knowledge of Korean folktales, although a traditional Korean myth propels the story forward. From the tiger, Lily learns that Halmoni has bottled up the hard stories of her past to keep sadness at bay. Lily makes a deal with the tiger to heal her grandmother by releasing those stories. What she comes to realize is that healing doesn’t mean health and that Halmoni is not the only one in need of the power of storytelling. Interesting supporting characters are fully developed but used sparingly to keep the focus on the simple yet suspenseful plot. Keller infuses this tale, which explores both the end of life and coming-of-age, with a sensitive examination of immigration issues and the complexity of home. It is at one and the same time completely American and thoroughly informed by Korean culture.

Longing—for connection, for family, for a voice—roars to life with just a touch of magic.