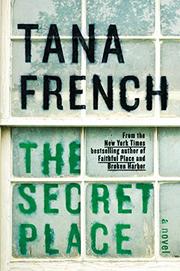 A hint of the supernatural spices the latest from a mystery master as two detectives try to probe the secrets teenage girls keep—and the lies they tell—after murder at a posh boarding school.

The Dublin novelist (Broken Harbor, 2012, etc.) has few peers in her combination of literary stylishness and intricate, clockwork plotting. Here, French challenges herself and her readers with a narrative strategy that finds chapters alternating between two different time frames and points of view. One strand concerns four girls at exclusive St. Kilda’s who are so close they vow they won’t even have boyfriends. Four other girls from the school are their archrivals, more conventional and socially active. The novel pits the girls against each other almost as two gangs, with the plot pivoting on the death of a rich boy from a nearby school who had been sneaking out to see at least two of the girls. The second strand features the two detectives who spend a long day and night at the school, many months after the unsolved murder. Narrating these chapters is Stephen, a detective assigned to cold cases, who receives an unexpected visit from one of the girls, Holly, a daughter of one of Stephen’s colleagues on the force, who brings a postcard she’d found on a bulletin board known as “The Secret Place” that says “I know who killed him.” The ambitious Stephen, who has a history with both the girl and her father, brings the postcard to Conway, a hard-bitten female detective whose case this had been. The chapters narrated by Stephen concern their day of interrogation and investigation at the school, while the alternating ones from the girls’ perspectives cover the school year leading up to the murder and its aftermath. Beyond the murder mystery, which leaves the reader in suspense throughout, the novel explores the mysteries of friendship, loyalty and betrayal, not only among adolescents, but within the police force as well.

Everyone is this meticulously crafted novel might be playing—or being played by—everyone else.