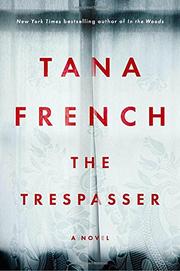 A sheltered young woman comes out of her cocoon—and her transformation ends with murder.

In the sixth Dublin Murder Squad novel, the unfolding of a murder case is seen through the eyes of Detective Antoinette Conway, a character we got to know first through her now-partner, Steve Moran, in The Secret Place (2014). But while her mysteriously hard-to-crack exterior was compelling from Moran's perspective, her internal monologue proves less so. Here, she comes across as much younger and less in control. And Moran and his goofy smile are just along for the ride as Conway heads up an investigation of the murder of 26-year-old Aislinn Murray, found dead in her meticulous home from a punch to the face and a smack on the fireplace hearth. It starts off looking like a regular lovers' tiff when the victim's texts reveal she had a date scheduled for that night with Rory Fallon, a smitten, daydreaming kind of guy. Conway thinks he should be easy to crack, but he swears it was someone else—Aislinn had a way about her that really made men obsessed. But she wasn't always that way, as her friend Lucy reveals. Her transformation into a heartbreaker was new, and it had purpose. As the two detectives start looking at other options—"Lover Boy is changing, in my mind"—the investigation is impeded by their own murder squad. But why? It's not just because the guys think Conway has a stick up you know where.

Respect is owed to French for making her interrogation scenes good enough to really spike your blood pressure, but the magic of previous installments is missing.