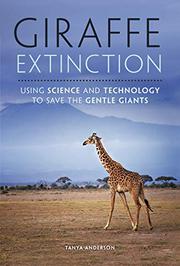 Using Science and Technology To Save the Gentle Giants

Giraffes have been known to humans for millennia, and this book introduces this beloved species and the threats it faces.

Ancient petroglyphs of giraffes exist in Namibia, and giraffes’ striking features have been familiar in illustrations from ancient times to the present day. The scientific community widely assumed that they were abundant. However, a report by the International Union for Conservation of Nature alerted scientists to a 40% decline in the number of giraffes in the wild between 1985 and 2015. The author describes the study of giraffes, beginning with field studies by pioneering Canadian biologist Anne Innis Dagg in the 1950s, and the gradual growth in understanding of giraffe subspecies, characteristics, and behavior that led to the discovery of their “silent extinction” and the movement to conserve and protect the species. The author systematically analyzes the reasons behind their declining population, which include animal predators, poaching, habitat loss, war, climate change, and trophy hunting. The book is engagingly designed, with color photographs, informative sidebars, detailed features such as those about giraffe taxonomy and the Masai Mara National Reserve in Kenya, and information about conservation and rescue organizations.

A fascinating and comprehensive analysis of the tragic decline of giraffes and the heroic efforts to reverse this trend.