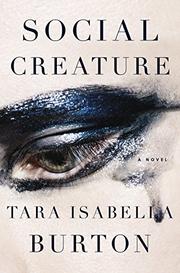 A calculating introvert latches onto a needy extrovert in this dark, stylish debut.

Louise Wilson is a frumpy, friendless 29-year-old working three jobs and sleeping in an illegal sublet in a nontrendy part of Brooklyn when she meets Lavinia Williams—a wealthy, vivacious 23-year-old “on a sabbatical” from Yale whose existence seems optimized for Facebook and Instagram. After the dazzling young woman brings Louise to a debauched New Year’s Eve bash, Louise resolves to remain in Lavinia’s orbit at all costs. To the dismay of her employers and the detriment of her bank account, Louise begins shirking her responsibilities in order to satisfy Lavinia’s every whim. Her sacrifices are initially worth the spoils—Lavinia invites Louise to move in with her, and the two spend every waking moment living to excess—but then the capricious socialite decides it’s time to find a new companion, forcing Louise to take desperate measures. Louise’s story unfolds in the present tense via an omniscient narrator. The structure heightens apprehension and uncertainty while the storyteller’s dry wit, keen observations, and gossipy tone promote the reader from detached observer to complicit confidant. Burton’s exceptional character work further elevates the tale; every individual is both victim and villain, imbuing their interactions with oceans of emotional subtext and creating conflict that propels the book toward its shocking yet inevitable conclusion.

Religion and culture writer Burton’s first foray into long-form fiction is at once a thrilling and provocative crime novel, a devastating exploration of female insecurity, and a scathing indictment of society’s obsession with social media.