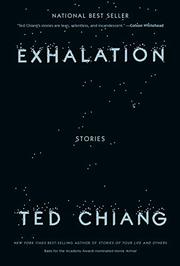 Exploring humankind's place in the universe and the nature of humanity, many of the stories in this stellar collection focus on how technological advances can impact humanity’s evolutionary journey.

Chiang's (Stories of Your Life and Others, 2002) second collection begins with an instant classic, “The Merchant and the Alchemist’s Gate,” which won Hugo and Nebula awards for Best Novelette in 2008. A time-travel fantasy set largely in ancient Baghdad, the story follows fabric merchant Fuwaad ibn Abbas after he meets an alchemist who has crafted what is essentially a time portal. After hearing life-changing stories about others who have used the portal, he decides to go back in time to try to right a terrible wrong—and realizes, too late, that nothing can erase the past. Other standout selections include “The Lifecycle of Software Objects,” a story about a software tester who, over the course of a decade, struggles to keep a sentient digital entity alive; “The Great Silence,” which brilliantly questions the theory that humankind is the only intelligent race in the universe; and “Dacey’s Patent Automatic Nanny,” which chronicles the consequences of machines raising human children. But arguably the most profound story is "Exhalation" (which won the 2009 Hugo Award for Best Short Story), a heart-rending message and warning from a scientist of a highly advanced, but now extinct, race of mechanical beings from another universe. Although the being theorizes that all life will die when the universes reach “equilibrium,” its parting advice will resonate with everyone: “Contemplate the marvel that is existence, and rejoice that you are able to do so.”

Visionary speculative stories that will change the way readers see themselves and the world around them: This book delivers in a big way.