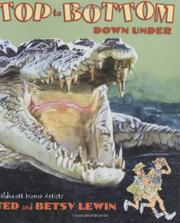 TOP TO BOTTOM DOWN UNDER

The Lewins’ latest travelogue offers typically vivid glimpses of distinctive wildlife, but is marred by anachronistic references to the indigenous human population, plus repeated reference to the persistent but wrong idea that draining water turns in different directions on different sides of the equator. Adding light-hearted commentary to a mix of Ted’s distinctive, expert watercolors and Betsy’s comic figures, the two visit a billabong in Kakadu National Park in the north of Australia and the wildlife preserve on Kangaroo Island to the south. They catch sight of the likes of kangaroos, sea lions, tall storks, a platypus, several saltwater crocodiles, an echidna and as night brings a sense of closure, a flock of tiny fairy penguins. People seldom appear in the painted scenes, but several sketched vignettes labeled “(ALL CIRCA 1900),” and so presumably copied rather than directly observed, superfluously shoehorn in picturesque groups of thong-clad Aborigines hunting and gathering. Australia’s flora and fauna are always worth a gander, but next to the Lewins’ Gorilla Walk (1999) and Elephant Quest (2000), this outing has a touristy superficiality. (Picture book/nonfiction. 7-9)