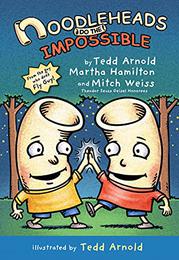 From the Noodleheads series, volume 6

Empty-headed (literally) sibs Mac and Mac fulfill the title’s promise with their grandest, daftest quest yet.

Inspired by their uncle Ziti’s “impossible” yarn about a snake and a frog that swallowed each other, the tubular twins decide to become famous for an impossible feat of their own. But what? Walking around the world? Counting all the stars above? Or all the grains of sand below? Each turns out to present certain difficulties—after counting a “bazillion” stars, for instance, Mac and Mac find more that have fallen into their mom’s washtub and need to be rescued. “Are they heavy?” asks Mac. Mac responds: “No, they’re light.” (Ha, ha.) Adults, particularly those of a scholarly bent, will appreciate the fantastically detailed, tiny-type notes at the end about folktale motifs, variations drawn from diverse traditions, modern versions, idioms, and even the notion of “infinity.” Readers younger of age and/or heart will chortle at the Macs’ general cluelessness, then cheer them on as they do get “around the world” just in time for lunch—thanks to the intervention of frenemy Meatball, the only nonpasta player in Arnold’s foodcentric cartoon frames, who turns their shoes around while they’re napping. The little jokes embedded within the large ones are just as delightful, as when Mac and Mac try to figure out how to “always [put] your best foot forward.” It’s not as easy as grown-ups say it is.

The sources may be old, but the drollery is timeless.