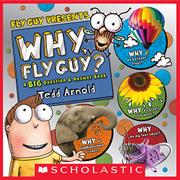 From the Fly Guy series

Fly Guy and his human best bud, Buzz, present answers to over 50 science questions, including “Why are wheels round?” and “Why do my feet smell?”

The latter query actually kicks off the session, as the first section, “The Buzz on Buzz!” covers bodily functions and products with simple but frank answers. These are accompanied by commentary from the two hosts in cartoon panels and large (discreet) photos of relevant body parts and a diverse cast of children mugging cutely for the camera. Subsequent sections cover in the same ways select topics in animal behavior (such as how scientists use hovering drone “snotbots” to study whale respiration), in nature and space, and, in a final grab bag, questions ranging from why garbage smells to why the White House is white. Arnold warns against “germs” but never specifically explains what they are, and some of his instructions for the simple projects and activities inserted in each section are confusingly terse. Nevertheless, he does introduce several fundamental processes, such as photosynthesis, and, along with proper admissions that we don’t really understand why we yawn, hiccup, or sleep, offers accurate and enlightening explanations for why cats get stuck in trees (it has to do with the way their claws curve), why ears make earwax, and plenty of other head-scratchers.