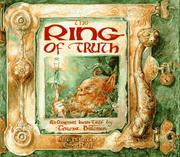 THE RING OF TRUTH

Bateman's first book is a beautifully layered, consistently sprightly take on the notion that truth is stranger than fiction. Itinerant peddler Patrick O'Kelley habitually tells magnificent lies, blarneying his gullible customers into purchasing scarves and trinkets. When he hears of a blarney contest in County Donegal, he sets his cap for the prize of a pot of gold, boasting that he ``can spout better blarney than the king of the leprechauns himself.'' The king's mountain has ears (proof is in one of Rayyan's witty complementary illustrations), and the king decides to teach Patrick a lesson. In the throne room to which Patrick has been summoned, the king bestows upon Patrick a Ring of Truth; the wearer cannot lie while it is on his finger, and cannot remove it. Without his sales pitch, Patrick loses business, for ``people . . . were now sore disappointed'' in Patrick, and they run the hapless peddler out of town after town. All is not lost—when Patrick tells the amazing truth of why he no longer qualifies for the competition, the people believe his story to be the biggest blarney of all, awarding him the gold. Through the ``fair folk,'' Patrick is provided with further truthful material for his tales, never believed by listeners in the grosser world. It's a reality that creates a larger, ironical wrapping for this tale; fanciful illustrations take off from a Renaissance base to provide yet another twist on the central theme. A cohesive, enchanting book. (Picture book. 5-8)