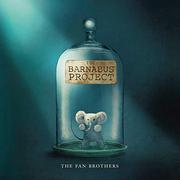 Along with a collection of creatures, Barnabus is a Failed Project, dubiously destined, according to cockroach pal Pip, to be “recycled.” Barnabus and his roommates—Light-Up Lois, Mushroom Sloth, and others—spend banal days imprisoned in bell jars, fed, poked and prodded by the Green Rubber Suits. With their fates sealed, Barnabus avows, “We need to escape!” Discovering that his elephantine trumpeting can break glass, Barnabus frees the others. The brave misfits, pursued by their creators and captors, escape through venting, emerging into another lab. The band works together to free a fellow captive, an enormous, cyclopian marine creature, releasing a flood of tank water that sweeps them out of the building’s depths and into the pet shop above the lab. The escaped company, discovering the wide world foretold by Pip, finds a lake, sunshine, grass, and trees: “a place that might be home.” The Fan brothers (Eric and Terry, joined for this project by Devin) generate copious precisely rendered, action-packed illustrations that capture the lab’s sinister labyrinth, the poignant features of the “failed” creatures, and moonlit cityscapes whose skyscraper “mountains” reach “all the way to the sky, lit with their own stars.”