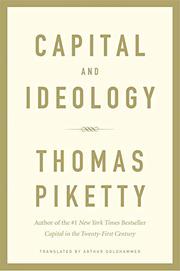 A massive investigation of economic history in the service of proposing a political order to overcome inequality.

Readers who like their political manifestoes in manageable sizes, à la Common Sense or The Communist Manifesto, may be overwhelmed by the latest from famed French economist Piketty (Top Incomes in France in the Twentieth Century: Inequality and Redistribution, 1901-1998, 2014, etc.), but it’s a significant work. The author interrogates the principal forms of economic organization over time, from slavery to “non-European trifunctional societies,” Chinese-style communism, and “hypercapitalist” orders, in order to examine relative levels of inequality and its evolution. Each system is founded on an ideology, and “every ideology, no matter how extreme it may seem in its defense of inequality, expresses a certain idea of social justice.” In the present era, at least in the U.S., that idea of social justice would seem to be only that the big ones eat the little ones, the principal justification being that the wealthiest people became rich because they are “the most enterprising, deserving, and useful.” In fact, as Piketty demonstrates, there’s more to inequality than the mere “size of the income gap.” Contrary to hypercapitalist ideology and its defenders, the playing field is not level, the market is not self-regulating, and access is not evenly distributed. Against this, Piketty arrives at a proposed system that, among other things, would redistribute wealth across societies by heavy taxation, especially of inheritances, to create a “participatory socialism” in which power is widely shared and trade across nations is truly free. The word “socialism,” he allows, is a kind of Pandora’s box that can scare people off—and, he further acknowledges, “the Russian and Czech oligarchs who buy athletic teams and newspapers may not be the most savory characters, but the Soviet system was a nightmare and had to go.” Yet so, too, writes the author, is a capitalism that rewards so few at the expense of so many.

A deftly argued case for a new kind of socialism that, while sure to inspire controversy, bears widespread discussion.