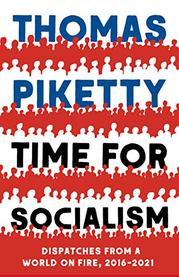 The noted French economist makes the case for overhauling the global economy to provide greater equality.

“In a large-scale federal community, bound by agreements on the free movement of goods, people, and capital, it is logical to entrust a central government with the key role for the taxes, ensuring the greatest redistribution.” So writes Piketty in a statement guaranteed to induce howling fits in strict libertarians. Advocating a technocratic, even bureaucratic socialism in this collection of columns from Le Monde, the author builds a careful case. The world hasn’t become poorer, writes Piketty, but the world’s governments have, thanks to a widespread program of corporate tax breaks and other economic concessions to people who do not need them. This immiseration of government has significant effects, one of the most visible of which is an impoverishment of the educational system. Inequality results from the fact that private wealth has been rising far faster than public wealth has been declining. “There is absolutely no sense in making tax gifts to groups who are old and wealthy and have already done very well in recent decades,” Piketty argues sensibly. He urges governments to impose both hefty estate taxes and far higher graduated income taxes, and he also suggests that at the age of 25, young people be given outright grants of $150,000 or so to help lift them up in the marketplace and encourage innovation and economic diversity. With such a boost, it would be possible for those young people to start their own businesses and take risks instead of settling in desperation for whatever job comes along. Piketty’s arguments are piecemeal and sometimes written as if for fellow economists, with his proposed reforms coming one after another. Readers might have found it more useful had he used his columns as a mine for a more coherent argument rather than reprinting. Still, each page offers an interesting provocation.