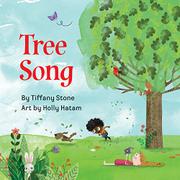 “Hushhhhhhhhhhhh warns wind and whirls seed down. / Seed lies, silent, on the ground.” Initially, the acorn is known generically as “seed,” but there can be no mistaking its photorealistic appearance—an interesting contrast against what appear to be computer-generated collages of the four seasons. Cartoonlike woodland creatures and ethnically diverse humans round out the brightly colored art. “Seed” waits quietly during fall and winter, escaping the attentions of hungry birds more than once, until it sprouts and sings its “tree-tra-la” near the bottom of a leafy green oak tree. Now it is referred to as “tree” instead of “seed.” As the tree grows, seasons come and go, and animals and humans enjoy their lives around it: They dance in its bright leaves; snowshoe around it; hold picnics; read in its shade. The illustrations make full use of different times of day, varying weather, and the underground homes of animals—all contributing to the richness surrounding the tree’s life. The idea of the tree as sentient and singing pervades the gentle near rhymes, and some little ones may become so attached they react with fear and sadness when the ancient oak finally lies silent. Fortunately, as with other mildly scary parts, soothing words and imagery follow.

A quiet book for the preschool nature shelf.