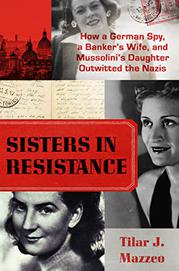 How a German Spy, a Banker's Wife, and Mussolini's Daughter Outwitted the Nazis

Before he became famous for condemning the Third Reich and its leaders, Galeazzo Ciano (1903-1944) was better known as Mussolini’s playboy son-in-law and foreign minister. In her latest elegant book of European cultural history, Mazzeo offers a colorful account of Ciano and Mussolini, the affairs and double-crosses that surrounded the diaries, and the courageous women whose efforts saved the manuscripts for posterity. Ciano began keeping diaries about Hitler’s inner circle in 1939, the year he started to question the war in Europe and the Third Reich’s alliance with Italy. Though in the service of a dictator, Ciano realized Mussolini’s involvement with Germany would be Italy’s downfall. So he turned to his journals, where he expressed his virulent disgust with the Third Reich and recorded “the political squabbles” between men like Himmler and Goebbels who “vied for power and influence with Hitler.” By 1943, the foreign minister, who gossiped shamelessly about his diary, had become a liability to the Third Reich. The Germans then sent a beautiful, young, married spy to learn the location of the journals, which Ciano had hidden before using them as collateral for a passage into exile. Little went according to plan. The spy fell in love with Ciano and turned double agent for the Allies. In that role, she developed an unlikely alliance with Ciano’s wife, Edda, and an American socialite to protect as much of Ciano’s manuscript—portions of which still ended up in German hands—for postwar publication in the U.S. Intelligent and compelling, Mazzeo’s probing book delves intriguingly into the “moral thicket” into which a group of strangers found themselves plunged during the long, dark days of World War II.