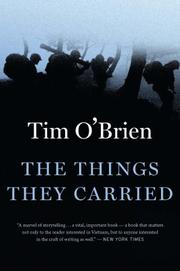 THE THINGS THEY CARRIED

It's being called a novel, but it is more a hybrid: short-stories/essays/confessions about the Vietnam War—the subject that O'Brien reasonably comes back to with every book. Some of these stories/memoirs are very good in their starkness and factualness: the title piece, about what a foot soldier actually has on him (weights included) at any given time, lends a palpability that makes the emotional freight (fear, horror, guilt) correspond superbly. Maybe the most moving piece here is "On The Rainy River," about a draftee's ambivalence about going, and how he decided to go: "I would go to war—I would kill and maybe die—because I was embarrassed not to." But so much else is so structurally coy that real effects are muted and disadvantaged: O'Brien is writing a book more about earnestness than about war, and the peekaboos of this isn't really me but of course it truly is serve no true purpose. They make this an annoyingly arty book, hiding more than not behind Hemingwayesque time-signatures and puerile repetitions about war (and memory and everything else, for that matter) being hell and heaven both. A disappointment.