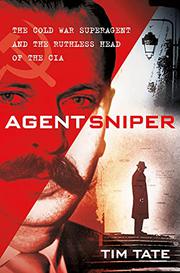 The Cold War Superagent and the Ruthless Head of the CIA

The gripping and deeply unedifying account of “the best defector the US ever had.”

Documentary filmmaker and investigative journalist Tate, who has written many books on both spycraft and true crime, has turned up a riveting spy story focused on Michal Goleniewski, a senior official in Poland’s intelligence service who also answered to the KGB. In a 1958 letter to the American Embassy in Switzerland, he offered “enticing leads to Soviet Bloc spies, which…would excite American counterintelligence interest.” The CIA responded, and there followed a bonanza in which Sniper (his code name) smuggled microfilm and thousands of top-secret Soviet documents to the West before defecting with his mistress in 1961. His debriefing produced more priceless information, but matters eventually went sour. The problem was not Goleniewski but rather the faction-ridden CIA. The agency’s Soviet and East European sections accepted Sniper’s bona fides, but the counterintelligence branch, led by James Jesus Angleton, did not. Famously paranoid, Angleton believed that the CIA was riddled with KGB agents that included nearly every defector. For three years, the CIA showered money and benefits on Goleniewski and used his revelations to arrest numerous traitors and their handlers around the world. Much of what followed remains classified, but Tate theorizes that Angleton’s faction assumed dominance within the agency, because in January 1964, it abruptly eliminated Goleniewski’s salary and protection and suspended him, subject to an “internal review” that never happened. Cast out, Goleniewski floundered for a time before developing severe psychosis, declaring himself the son of the czar of Russia who had been executed along with his family in 1918. In the final 100 pages, Tate chronicles 30 years of bizarre behavior until Goleniewski’s 1993 death, alternating with wildly dysfunctional CIA behavior, an ongoing theme throughout the book.

Fascinating dirty linen from the early decades of the CIA.