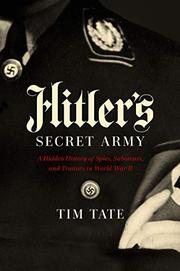 A Hidden History of Spies, Saboteurs, and Traitors

A prolific British documentary filmmaker and author pursues the documentation released between 2000 and 2017 by MI5 and other entities that reveals the mostly secret convictions of a considerable number of British spies during World War II.

Despite what England has publicly presented—that the so-called Fifth Column was a myth and the threat of “enemies within” just hysteria—Tate (Pride: The Unlikely Story of the True Heroes of the Miner's Strike, 2018, etc.) returns to the record to tell a different story. He underscores three elements: that the majority of spies for Nazi Germany were not German immigrants but British citizens; that those punished were of lower class than the aristocratic ringleaders at the top; and that much of the evidence of convictions was buried or covered up for decades. Tate looks at several espionage networks, many developed in small towns around regular kinds of people who became radicalized by infiltrations of resourceful German intelligence agents in Britain in its plan to invade the country in the late 1930s. Britain did not have a functioning anti-espionage law until August 1939, when Parliament enacted an Emergency Powers (Defence) Act, allowing a classification system (regarding the level of threat) for non-naturalized Germans living in the country. By May 1940, the House of Commons passed the Treachery Act, dispensing the death penalty for treason. The pool of big fish, “the key pillars of British society,” contained plenty of rabid anti-Semitic, pro-Nazi figures, such as Oswald Mosely and his British Union and Archibald Ramsay and his Right Club, which was plotting a coup to replace the government with Nazi sympathizers. While the latter retained his seat in the House of Commons, many little fish were severely punished, even hanged. From the internment of suspects, the British eventually turned to a more covert form of entrapment: the sting operation. In true documentarian fashion, the author relentlessly brings forth evidence that has long been buried.