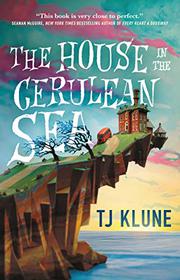 THE HOUSE IN THE CERULEAN SEA

A tightly wound caseworker is pushed out of his comfort zone when he’s sent to observe a remote orphanage for magical children.

Linus Baker loves rules, which makes him perfectly suited for his job as a midlevel bureaucrat working for the Department in Charge of Magical Youth, where he investigates orphanages for children who can do things like make objects float, who have tails or feathers, and even those who are young witches. Linus clings to the notion that his job is about saving children from cruel or dangerous homes, but really he’s a cog in a government machine that treats magical children as second-class citizens. When Extremely Upper Management sends for Linus, he learns that his next assignment is a mission to an island orphanage for especially dangerous kids. He is to stay on the island for a month and write reports for Extremely Upper Management, which warns him to be especially meticulous in his observations. When he reaches the island, he meets extraordinary kids like Talia the gnome, Theodore the wyvern, and Chauncey, an amorphous blob whose parentage is unknown. The proprietor of the orphanage is a strange but charming man named Arthur, who makes it clear to Linus that he will do anything in his power to give his charges a loving home on the island. As Linus spends more time with Arthur and the kids, he starts to question a world that would shun them for being different, and he even develops romantic feelings for Arthur. Lambda Literary Award–winning author Klune (The Art of Breathing, 2019, etc.) has a knack for creating endearing characters, and readers will grow to love Arthur and the orphans alongside Linus. Linus himself is a lovable protagonist despite his prickliness, and Klune aptly handles his evolving feelings and morals. The prose is a touch wooden in places, but fans of quirky fantasy will eat it up.

A breezy and fun contemporary fantasy.