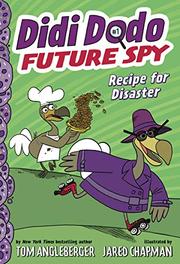 Angleberger delivers a beginning chapter book in a series about two goofy dodo birds on a mission.

Accomplished, cautious baker Koko Dodo and self-proclaimed “future spy” Didi Dodo embark on an adventure to find Koko’s stolen Super Secret Fudge Sauce, which she needs in order to win the Queen’s Royal Cookie Contest, held that very afternoon. Didi, drawn as a gangly dodo bird on roller skates with a battered fedora and round glasses, is always ready to propose a “daring plan” in response to their latest obstacle. Brief chapters, ample cartoon illustrations, and occasional other visuals such as recipe cards and comic strips will move along emergent and reluctant readers alike. Frequent, emphatic expostulations (“WHUT ARE YOO BURDS DOON IN MAH RELISH?”) are likely to find the audience divided into love-them or hate-them camps. As Didi and Koko seek the secret ingredient and race to reach the cookie contest in time, they encounter a rapping Chihuahua, an angry yak, a penguin in a food truck, and more. The denouement reveals that just about everyone is guilty of one crime or another. While the stated goal of this tale is to determine the thief, the underlying objective is to take readers on a raucous roller-coaster ride.

This bite-sized book is for all the kids who love Inspector Flytrap, with whom Koko Dodo made her initial appearance.