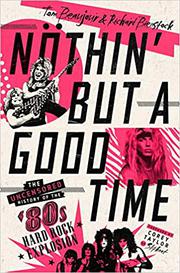 NÖTHIN' BUT A GOOD TIME

The Uncensored History of the '80s Hard Rock Explosion

An oral history of the guitar-shredding rise and sleazy, druggy fall of 1980s hair metal.

In this lively, comprehensive saga of the much-maligned genre, Beaujour and Bienstock deliver plenty of the sordid tales of sex and hard living that the music often celebrated—e.g., Motley Crüe’s orgies, a drug-addled Ozzy Osbourne snorting ants, Guns N’ Roses in heroin-steeped disarray—while also showing how many of the musicians were hard workers dedicated to their craft. Guitarists playing the clubs on LA’s Sunset Strip all aspired to Eddie Van Halen’s greatness; acts engaged in full-scale “flyer wars” to get attention for their gigs; and they labored diligently on songs to land lucrative record deals. The hairspray and spandex, by the bands’ lights, were just part of the necessary promotion and evidence of the effort they were putting in. “People are lazy [now],” says designer Al Bane, who outfitted a host of acts, lamenting the end of flashpots and assless chaps. The atmosphere was thick with casual misogyny toward disposable roadies and video models; Poison cynically pursued “ugly fat chicks” to attend shows as a point of differentiation. Throughout, the anecdotes are copious and irresistible: Great White singer Jack Russell’s going to jail after a PCP bender, Axl Rose’s chasing David Bowie out of a club for looking at his girlfriend the wrong way, Skid Row’s Sebastian Bach’s “inhaling beers” and getting into a drunken fistfight his first night with the band. Conventional wisdom dictates that Nirvana and grunge killed hair metal, but the musicians argue that oversaturation of bands was the real culprit. Regardless, the best-known acts now do brisk business on the nostalgia circuit. “The older fans are slightly larger now,” says L.A. Guns’ Tracii Guns, “so it makes the room look even fuller.”

An engrossing deep dive into a lurid, free-wheeling moment in pop music.