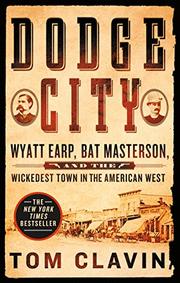 Wyatt Earp, Bat Masterson, and the Wickedest Town in the American West

Of cowpokes, desperadoes, and the law in a Western town in which it wasn’t always easy to tell which was which.

Dodge City, Kansas, was founded as a military outpost on the western reaches of the plains. It became a supply center, a railhead, and a stockyard—all adding up to a place into which people, mostly young men, drifted. As practiced popular historian and journalist Clavin (Reckless: The Racehorse Who Became a Marine Corps Hero, 2014, etc.) notes, some of those young men were downright dumb, and many of them drowned whatever intelligence they had with alcohol. A story unfolds: one night, Wyatt Earp, renowned tough-guy lawman just this side of being an outlaw himself, grabs a miscreant by the ear, like a schoolmarm. “If his companions had been smart, the arrest would have signaled it was time to call it a night—but they weren’t very smart,” writes the author. They tried to free their buddy by standoff and ambush and finally slunk off. The moment, and Clavin’s description of it, is characteristic: there’s kerfuffle and anticlimax, with perhaps less gun smoke than might be expected. The author paints a lively portrait of the town and its denizens, particularly those well-known enforcers. Along the way, he reveals a few lesser-known aspects of their characters, such as Bat Masterson’s Huck Finn–ish qualities, and he explicates the rules of faro, always helpful for understanding why the gaming table was often a flashpoint. There are even hints of revisionist history, as when Clavin notes the disproportionate number of African-American and other minority victims of violence: “The first recorded killing in the new Dodge City was that of a man known as Black Jack, because he was indeed a black man.”

There’s some rehashing of the old but much that is new, making this a must-have for buffs—nothing world-changing but a nicely spun Wild West yarn to satisfy even the most ardent consumer of oaters.