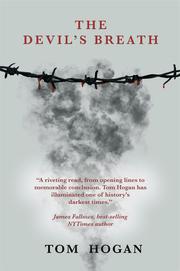 A riveting story of survival, set during the Holocaust.

In 1943, Nazis invade a Jewish settlement in Poland and arrest two leading members of the resistance. The couple, Perla and Shimon Divko, an investigative reporter and former detective for the Warsaw Police, respectively, are transported to Auschwitz. Once there, they’re separated and try their best to survive as prisoners. Perla attempts to document and archive the experiences of those in the camp before becoming a typist for Nazi guard Gisela Brandt, and Shimon finds ways to slightly improve the conditions of his crew in the munitions factory. One day, however, the chief accountant at Auschwitz is found dead and a ledger goes missing from a safe. It turns out that the camp commander, Rudolf Hoss, was making his own gold ingots at the camp—stolen from the prisoners’ possessions, including dental fillings—which have now gone missing, as well. Worried that his operation will be found out, Hoss demands that Perla and Shimon assist him in to tracking down the ledger, the gold, and the murderer. Hogan’s prose is gripping as well as informative about its characters, as when Perla begins working as a recording clerk at the camp: “At first the numbers and their significance had overwhelmed her because she realized that each entry marked the end of a life…she had resolved to remember the lives behind the numbers….It was a resolution that lasted the better part of a month before the numbers overwhelmed her intentions.” Along with the primary plot of the missing ingots and ledger, Hogan also effectively details the grim daily aspects of life in the death camp—from the lack of food to prisoners’ tips for survival. Although the story of the investigation is certainly engaging, it’s also brutal; the author never sugarcoats the horrors of the camp. He deftly presents the heinous, historical truths of Auschwitz within the fictional realm of his story—a delicate balance that Hogan achieves with intelligent, thoughtful prose.

An evocative work of fiction rooted in one of the darkest eras of history.