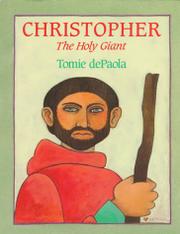 The story of Reprobus, the huge man who came to be known as Christopher, patron saint of travelers. Wishing to serve "the mightiest of all," he makes himself available to a king, to the devil, and then to Christ, who appears as a small child needing to cross a turbulent river. As the slight figure on his shoulders seems to grow heavier, the mighty giant struggles valiantly against his weight and the mounting storm, finally delivering the boy to the opposite bank of the river. He's rewarded with a miraculous transformation of his staff and a new name, meaning "Bearer-of-Christ." DePaola's flat, expressive forms are enriched with a deep palette, appropriate to the story's nocturnal climax, and subtle modeling, giving the figures unusual weight and stability. The carefully composed scenes are spare and powerful; though the telling is unremarkable, the art speaks for itself. (Picture book. 4-8)