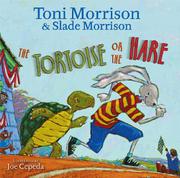 THE TORTOISE OR THE HARE

Authors and illustrator combine forces again in this umpteenth version of the classic tale (Peeny Butter Fudge, 2009). Neither Jimi Hare nor Jamey Tortoise is popular. J. Hare is too fast for anyone to keep up: His running is “too quick, / a trick!” J. Tortoise, on the other hand, is too smart: He’s “too quick, / a trick!” In preparation for the coming race, Hare exercises and Tortoise strategizes. Both hold phone interviews with a foxy reporter, and then it’s off to the starting line. J. Tortoise avails himself of trains and boats and planes while J. Hare performs stunts. There’s no surprise at the finish line, only in the newspaper headline, which proclaims “Winner loses! Loser wins!” Both contestants are happy and go off hand in hand, because what matters is friendship—which, bafflingly, appears to erupt spontaneously at the end. The Morrisons seem to be sending messages about crafty news manipulation and the absurdity of athletic competition. But is this the appropriate audience? Cepeda’s oil paintings are colorful and appropriately frenetic, but the story is just too diffuse and confusing. (Picture book. 4-7)