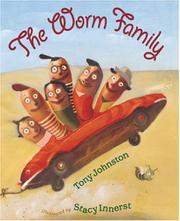 A well-intentioned episode derailed by illustrations that are, to say the least, problematic. Johnston lays out her theme upfront—“Rejoice in who you are. Rejoice in who everyone else is!”—then develops it in lively prose, laced with rhymes and partial rhymes, by following an extended family of worms whose efforts to find a home are stymied by violent receptions from a succession of non-worm neighbors. At last, to a chorus of “We are Worms and we are proud! We are long and we are LOUD!,” they raise their chins (“ ‘We don’t have chins,’ said Blanche. ‘Never mind,’ said Mother, ‘pretend’ ”), defiantly dig in—and receive an unexpectedly warm welcome. So far so good—but the vermiform cast’s brown skin, straightened hair, exaggeratedly thick lips, and wide eyes often come off as decidedly unfunny caricatures. Steer young readers to such equally joyous, and better conceived, celebrations of diversity as Sheila Hamanaka’s All the Colors of the Earth (1994) or Sam Swope’s Araboolies of Liberty Street (1989). (Picture book. 7-9)