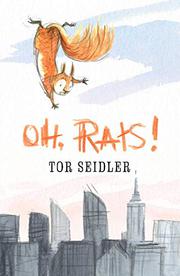 After being kidnapped by Walter, a chatty red-tailed hawk, a spunky New Jersey squirrel needs to adjust to life with wharf rats on a Manhattan pier.

When a violent encounter with hot tar and then a dunk in the Hudson leaves red squirrel Phoenix without his signature dashing fur and adrift in the middle of a dizzying city, sister and brother rats Lucy and Beckett (who also reads and writes) take him in. Soon their community of wharf rats discovers that an odious New York developer (ahem!) named P.J. Weeks is tearing down their beloved pier to build tennis courts. Unlike squirrels, wharf rats are highly organized in their resistance to human encroachment. Phoenix is enlisted to sabotage the electrical grid, surprising even himself with the results. When Walter eventually returns and offers Phoenix a ride back to his original home, a moment of truth allows Phoenix to choose the life that feels most relevant to his newer self. Veteran author Seidler sets just the right pace, with a skillfully drawn handful of characters and an adept rendering of Phoenix’s transformation from squirrel to rat. The novel’s ambiance, allegory, and illustrations are more reminiscent of mid-20th-century classics than recent anthropomorphic animal fare despite the very current theme.

A charming tale of identity, migration, gentrification, and organized resistance.