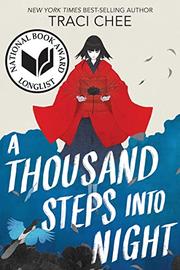 A THOUSAND STEPS INTO NIGHT

A terrifying encounter leads a young woman down a path of discovery, adventure, and looming destruction: Is this a curse, and will it bring a change in perspective?

Set in a Japanese-inspired fantasy world with a pantheon of gods, spirits, and demons that are explained in detail in the plentiful footnotes, this novel follows protagonist Otori Miuko, who is a misfit in her small village. Part of the serving class, Miuko is ordinary in every way—except for being unusually clumsy, loud, and stubborn. A run-in with a demon changes everything (except her clumsiness). Cast out by her father and the priests, she searches for a cure for the violent and bloodthirsty urges taking over her body and mind. On her journey, she uncovers horrors and abuses perpetrated by both humans and demons and develops friendships in unlikely places. Midway through, the story turns in on itself with intricacy and complexity, expanding on the character development and worldbuilding as readers view a past scene from a different perspective. Empowered at times, powerless at others, Miuko comes across other women in dire situations, requiring her to question the cultural norms of what it means to be a female in an oppressive patriarchal society. Chee introduces a nonbinary gender designation, hei, through side characters and short historical references. A dark fantasy with welcome moments of levity, this story will charm fans of Studio Ghibli’s Spirited Away.

A captivating read rich in atmosphere.