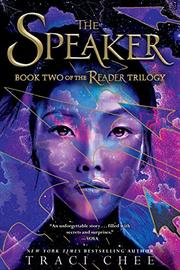 From the The Reader Trilogy series, volume 2

The adventure continues in Chee’s second installment of the Sea of Ink and Gold series.

Sefia and Archer have escaped the Guard, but the danger is far from over. They are still being hunted, and their past and future, slowly being revealed by the Book, are catching up to them. Struggling to accept the dark truths of their pasts, Sefia and Archer embark on a crusade to eliminate all the impressors and free the boys whom, like Archer, the impressors have kidnapped and brutally trained to kill. Meanwhile, the pirate Reed and his colorful crew are derailed from their pursuit of eternal glory when they find out the Blue Navy is threatening their way of life by hunting and eliminating their fellow outlaws at sea. New characters are introduced, and with them, more secrets are revealed. Chee’s skill at managing complex storylines shines through as stories upon stories meet and intertwine in startling ways. Throughout it all, Sefia delves deeper into the book and her parents’ past for clues of her and Archer’s future. What she finds will catapult them into an even more dangerous and impossible mission. The novel features a diverse cast of characters, and Sefia has East Asian features.

Filled with even more magic and intrigue than its predecessor, this is a gripping follow-up that will leave readers speculating and wanting more.