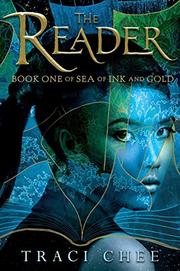 From the The Reader Trilogy series, volume 1

In her debut for teens, Chee takes readers on a heart-racing adventure.

In the land of Kelanna, Sefia and her aunt Nin have been on the run for years, avoiding detection and the people who murdered her father. But when Nin is kidnapped, Sefia knows what they want: the mysterious package she salvaged from the wreckage of her home all those years ago. Determined to stop running, Sefia opens the package and finds a book: a foreign object known to a dangerous few and possibly the key to her past and finding Nin. On her quest to uncover the truth, Sefia encounters a silent boy trained to kill, powers she never knew she had, and forces who will go to great lengths to acquire the book. Chee weaves Sefia’s story with multiple narratives, such as the book-within-the-book tale of the legendary Capt. Reed and his colorful crew and the story of Lon, a boy inducted into a secret world as Apprentice Librarian. Commanding storytelling and vivid details, particularly of the magical process of reading, bring the story to life. Also, tucked within the pages of the book are surprises like a blotted-out paragraph, a disappearing sentence, and ink splatters that sometimes resolve into fingerprints. Kelanna is a racially and ethnically diverse land; Sefia herself has East Asian features and coloring.

This cleverly layered fantasy leaves more questions than it answers, but fortunately, it’s only the first of what promises to be an enchanting series.