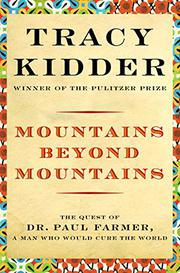 Full-immersion journalist Kidder (Home Town, 1999, etc.) tries valiantly to keep up with a front-line, muddy-and-bloody general in the war against infectious disease in Haiti and elsewhere.

The author occasionally confesses to weariness in this gripping account—and why not? Paul Farmer, who has an M.D. and a Ph.D. from Harvard, appears to be almost preternaturally intelligent, productive, energetic, and devoted to his causes. So trotting alongside him up Haitian hills, through international airports and Siberian prisons and Cuban clinics, may be beyond the capacity of a mere mortal. Kidder begins with a swift account of his first meeting with Farmer in Haiti while working on a story about American soldiers, then describes his initial visit to the doctor’s clinic, where the journalist felt he’d “encountered a miracle.” Employing guile, grit, grins, and gifts from generous donors (especially Boston contractor Tom White), Farmer has created an oasis in Haiti where TB and AIDS meet their Waterloos. The doctor has an astonishing rapport with his patients and often travels by foot for hours over difficult terrain to treat them in their dwellings (“houses” would be far too grand a word). Kidder pauses to fill in Farmer’s amazing biography: his childhood in an eccentric family sounds like something from The Mosquito Coast; a love affair with Roald Dahl’s daughter ended amicably; his marriage to a Haitian anthropologist produced a daughter whom he sees infrequently thanks to his frenetic schedule. While studying at Duke and Harvard, Kidder writes, Farmer became obsessed with public health issues; even before he’d finished his degrees he was spending much of his time in Haiti establishing the clinic that would give him both immense personal satisfaction and unsurpassed credibility in the medical worlds he hopes to influence.

Skilled and graceful exploration of the soul of an astonishing human being.