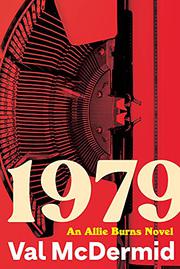 A pair of cub reporters find their way into trouble with investigative stories that they hope will make their careers.

The 35th novel and first new series in 20 years from McDermid, a queen of the genre in Britain, introduces Allie Burns, a talented and brave spitfire of a journalist in her mid-20s who's trying to work her way up the pecking order in the man's world of a tabloid newspaper called the Glasgow Daily Clarion—no matter how many times per week she has to remind some condescending male that she's not his "darling." "One adult in two in Scotland reads the Clarion," announces the paper's slogan, and the wags in the office add, "The other one cannae read." McDermid, who worked in Glasgow as a reporter in the year of the title, has supplemented her memories with a great deal of research and background reading. It was the year from hell for that city, with cataclysmic winter weather, strikes, and terrorist threats, but for ambitious reporters like Allie and her colleague Danny Sullivan, 27, any kind of trouble is an opportunity. When Danny finds out that his creepy brother is involved in a large-scale insurance-fraud scheme benefiting the richest men in the country, he digs in like a private investigator, lifting keys, unlocking drawers, and assuming made-up identities to conduct interviews with suspects. Aware that he's not much of a writer, he enlists Allie's help early on, partly because she's known for her sparkling prose but also because he needs help thinking things through, hoping to find a way to protect his brother from the fallout. For their next trick, Allie and Danny get themselves involved with a group of somewhat dopey wannabe terrorists who hope to model a Scottish independence movement on the IRA's example. The bad guys are not the only ones with secrets, though.

The plot is engrossing, the period atmosphere brilliant, and who can ever get enough of the way Scottish people talk?