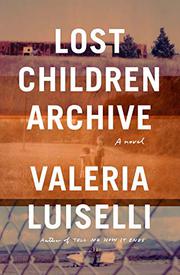 A family treks south to the U.S.–Mexico border, bearing tales of broken migrant families all the way down.

In her last nonfiction book, Tell Me How It Ends (2017), Luiselli wrote about her work as a translator for Latin American families attempting to enter the U.S. This remarkable, inventive fictional take on the theme captures the anguish of those families through a deliberate piling-up of stories; reading it, you feel yourself slowly coming face to face with a world where masses of children are separated, missing, or dead of exposure in the desert. Luiselli eases into the tale by introducing an unnamed New York couple, both audio documentarians, driving their children, ages 10 and 5, to the Arizona-Mexico border. The father wants to explore the remnants of Apache culture there; the mother, who narrates much of the book, is recording an audio essay on the border crisis and has promised a woman to look into the fates of her two daughters who’ve been detained. As they drive, they alternate listening to news reports about the border and an audiobook of Lord of the Flies, and the opening sections are thick with literary references and social critique; imagine On the Road rewritten by Maggie Nelson. But the story darkens as they witness the plight firsthand and, later, as the couple's children stumble into their own crisis. There’s a slightly bloodless, formal aspect to the novel in the early going: It's structured around “archive boxes” that each character carries in the car’s trunk, and a book of elegies the mother reads to the children is made up of variations on works by Ezra Pound, Joseph Conrad, Juan Rulfo, and more. In the current political moment, one might want a less abstruse approach. But as the novel rises to a ferocious climax in a 20-page-long single sentence, Luiselli thunderously, persuasively insists that reckoning with the border will make deep demands of both our intellectual and emotional reserves.

A powerful border story, at once intellectual and heartfelt.