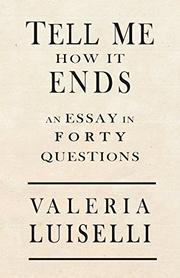 TELL ME HOW IT ENDS

An Essay in 40 Questions

A heartfelt plea to change the dialogue on Latin American children fleeing violence in their homelands to seek refuge in America.

A Mexican-born novelist, Luiselli (The Story of My Teeth, 2015, etc.) began the inquiry that informs her book-length essay as a Mexican-born writer, living in America, awaiting her green card. Her sense of mission intensified when she began working as a translator for those seeking pro bono legal assistance in their attempts to avoid deportation. She found that their stories could not match neatly with the 40 questions on the immigration questionnaire. Some of the children lacked fluency in Spanish as well as English, and some of their memories were vague or evasive. Yet the dangers they had encountered were real, as was the threat of returning to their countries of origin. Luiselli effectively humanizes the plights of those who have been demonized or who have been reduced to faceless numbers, the ones caught in the web of gang violence fueled by drug wars and the American arms trade. She writes with matter-of-fact horror in response to question No. 7, “did anything happen on your trip to the U.S. that scared you or hurt you?,” that “eighty percent of the women and girls who cross Mexico to get to the U.S. border are raped on the way.” Yet the victims are often criminalized in the American debates over immigration: “In the media and much of the official political discourse, the word ‘illegal’ prevails over ‘undocumented’ and the term ‘immigrant’ over ‘refugee.’ ” The author also explains how the immigrant crisis predated the triumph of Trump and how policies of the Obama and Bush administrations were heartless in treating such refugees as some other country’s problem. Though Luiselli may not convince those adamantly opposed to loosening regulations, she hopes that those who have been willfully blind to the injustices will recognize how they “haunt and shame us…being aware of what is happening in our era and choosing to do nothing about it has become unacceptable.”

A powerful call to action and to empathy.