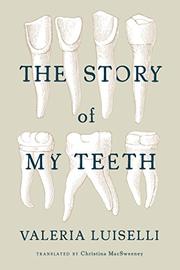 THE STORY OF MY TEETH

Each section of the second novel by Mexican author Luiselli (Faces in the Crowd, 2014) opens with an epigram about the disconnect between the signifier and signified. If you dozed off during lectures on semiotics in college, fear not: though the author is interested in the slippery nature of description, this novel’s style and tone are brisk and jargon-free. The narrator, Gustavo, has decided late in life to become an auctioneer (“to have my teeth fixed”), a job he thrives at in part by skillfully overhyping the values of the objects on offer. Not that he’s immune to being oversold himself: did the new set of teeth he buys at auction really once belong to Marilyn Monroe? The skeletal plot focuses on Gustavo’s hosting an auction to benefit a church outside Mexico City, his hoard of prized objects, and his reunion with his son. But the book lives in its offbeat digressions, like an extended discussion of literary eminences’ lives via their teeth. (St. Augustine was inspired to write his Confessions due to a toothache; G.K. Chesterson had a marble-chewing habit; false teeth were recommended to calm Virginia Woolf’s inner turmoil.) But all this dental chatter isn’t precisely the point. “We have here before us today pieces of great value, since each contains a story replete with small lessons,” Gustavo tells a group of auction attendees, and the whole book is a kind of extended commentary on how possessions acquire value largely through the stories we tell about them. (In an afterword, Luiselli explains that this “novel-essay” was inspired by such questions and was first written for workers in a factory outside Mexico City that has a gallery connected to it.)

A clever philosophical novel that, as the author puts it, has “less to do with lying than surpassing the truth.”