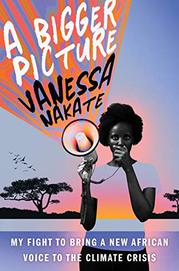 Debut memoir from a young Ugandan climate activist who was infamously cropped out of a 2020 photo taken at the World Economic Forum in Davos.

“I was the only one who wasn’t from Europe and the only one who was black,” writes Nakate. “They hadn’t just cropped me out, I realized. They’d cropped out a whole continent.” In 2018, after witnessing devastating floods in Uganda and other nations in East Africa, Nakate diverged from her path studying business and finance in college. Reckoning with the severe lack of formal education about the climate crisis, she conducted extensive research and connected with other young activists who shared her passion. Though initially unsure and hesitant when she took to the streets of Kampala with her placards to strike, Nakate harnessed her inner courage and genuine concern for the planet to make her voice heard, and readers will eagerly follow the ups and downs of her journey. From her early local strikes with family and friends to international travel to the Youth Climate Summit in New York City in September 2019 and the U.N. Conference of the Parties in Madrid two months later, Nakate is frank about the disappointments she experienced as she battled the media’s tendency to ignore voices like hers. The text is riddled with eye-popping statistics to illustrate the gravity of the climate change situation, but it is the author’s personal stories that make the book particularly memorable. Nakate is in a vital position as a Black, Ugandan woman. Through her lens and interviews with other activists, we see how climate disasters disproportionately impact women in the Global South. Along with recounting her experiences, the author provides lots of information that may be unfamiliar to readers: Facts about the destruction of the Congo rainforest and the drying out of the Lake Chad Basin will force readers to pay attention—and hopefully, to act in whatever way they are able.

Nakate is conscious of the power her voice wields, and the world would benefit from listening.